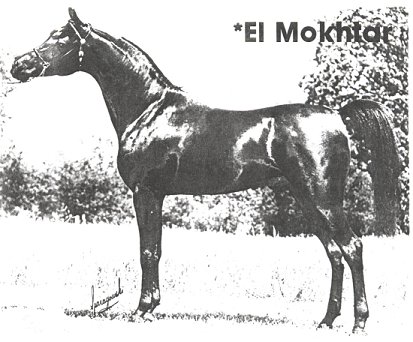 *EL MOKHTAR was bred by the E.A.0., Cairo Egypt; foaled in 1971, he was imported by a syndicate of American Arabian breeders in 1974. Their main interest In this stallion was his great potential as a sire, for, as we shall see, he was royally bred. Accordingly, he was shown but little (though he was trained and made a fine English Pleasure horse); the American breeding public knew him from a few ads placed in magazines, but no super-hype promotion surrounded his breeding career. Shortly after his arrival In America, *EL MOKHTAR was seen by 'Black Stallion' author Walter Farley, who considered him the best real life representation of his fictional 'Black Stallion' he had ever seen. An offer was made for *EL MOKHTAR's services in the role of 'The Black' for the first 'Black Stallion' film, but it was firmly declined by his syndicate. Black Stallion trainer Corky Randall was also convinced that *EL MOKHTAR was one of the very best true black Arabians he had ever seen (he looked at dozens seeking quality black athletes for the demanding movie role!) At his urging, the Studio bought out the entire 40-member syndicate in order to secure his services for the second 'Black Stallion' film. *EL MOKHTAR was one of 3 black Arabian stallions used to portray 'the Black' in the second 'Black Stallion' film. The director loved his huge, expressive eyes, so he appears in several close-up shots. More important to the film, MOKE could run! He is the race horse in the cross-country race in the film. The native 'extras' riding the other horses were urged to make a real race of it...and hey did. The 'come from behind' win of 'The Black' is the product of a real race. *EL MOKHTAR was also schooled to do the 'courting' scenes with the gray gelding TALISHMA, who played the mare JOHAR in the film. Those scenes were scheduled as the last to be shot. Just prior to the filming date, *EL MOKHTAR developed colic. No modem veterinary facility was available In Morocco; surgery was not possible, and he died. A 'post' revealed a severe twist, and a rupture; even if surgery had been possible, It Is very unlikely he would have survived. *EL MOKHTAR was a striking individual, unusually tall for a purebred Arabian (a true 15.3 HH!). He was very 'New Egyptian' in type, with a long, naturally clean-cut neck and lovely head. Fine boned for his size, he passed on both refinement and type. Perhaps more important, *EL MOKHTAR was a good athlete - the work in the Black Stallion film was strenuous and demanding - and a very good nature, willing performer. Corky Randall said 'He just never did anything wrong' ' His calm, sensible, even temperament, and great intelligence are also evident In his get and grand-get. *EL MOKHTAR: THE-LEGACY The 7-year totals in the Breeders Book credit *EL MOKHTAR with 5 American-bred Champions, with points in both Halter and Performance events. 'An *EL MOKHTAR daughter, exported to Norway, became National Champion in Halter in that country'. When *EL MOKHTAR died, his sudden, unexpected and tragic death cast a spell over the cast and crew filming 'The Black Stallion Returns. Young actor Kelly Reno (who played Alec in the film) wrote a touching memorial to his equine friend, in which he said the film would be *EL MOKHTAR's memorial. Perhaps It Is ... for literally millions of people have seen him represent the Arabian breed in the thrilling race of that film, and the breed could hardly have a finer representative! Yet the film is not his only legacy. He left over a hundred purebred get . . . a few blacks of rare quality among them . . . They are his living legacy, and through them, *EL lives on. Memorial to Make. We all knew him and loved him; he was the biggest and the best. We all joked and funned about the way he ran and his little pin ears. and his long skinny legs, but there is not a horse alive that could take his place. He was born an Arab and he did his best, but the Lord took him away to rest, and in years to come when people see The Black Stallion Returns they will say that this film is *EL MOKHTAR's memorial. May he rest in peace and may the Lord take care of him. I believe that love Is the greatest thing In the world; that It alone can overcome hate; that right can and will triumph over might.

Back to Lineage
Back to Shanandoah Arabians